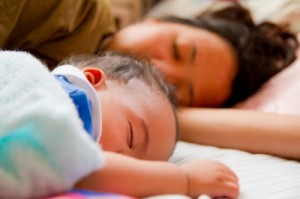 If a baby won’t sleep, many parents often allow the baby to begin Sleeping with Parents. In this post, we’ll explore both sides of this controversial issue and cover a few basic tips to get baby to sleep.

Allowing a child to sleep with his or her parents, or co-sleeping, is sometimes a controversial topic today. Between those who advocate co-sleeping and those who are against it, there are pros and cons on both sides.

People who advocate children Sleeping with Parents state that it’s helpful when a baby won’t sleep. It also makes breastfeeding during the night easier, helps both parents and children get more sleep, and strengthens the parent-child bond. They also claim that it is natural since it was the norm in most cultures until the Middle Ages. But co-sleeping is controversial because of the possibility that a parent might roll over and smother an infant, or that an infant may become tangled in blankets or pillows.

Having children sleep in a different room has been the normal practice in western countries for several centuries. On one hand, there is no possibility of a parent smothering the child. On the other hand, some co-sleeping advocates claim that having infants sleep
apart from their parents deprives them of parent-child bonding.

In reality, there may not be a hard and fast conclusion about which approach is better, although if you are going to sleep with your child, make sure you research it with safety in mind. One compromise solution may be to have your infant sleep in the same room
without having him or her in the same bed with you.

To get baby to sleep when he or she is fussy, try rocking, singing lullabies, or feeding your baby in a darkened and cozy room. If you are tending to your baby’s needs in the middle of the night, keep the lights dim and your voice and movements calm. Many parents with cars find that putting their child in a car seat and driving for a few miles will soothe their child to sleep. Alternatively, many parents will lie down and let their infant snuggle with them until the baby falls asleep – the challenge here is remembering to stay
awake yourself so that you can put your baby to bed!

Did You Know About The Reflux In Babies?
When do Babies Sleep Through?