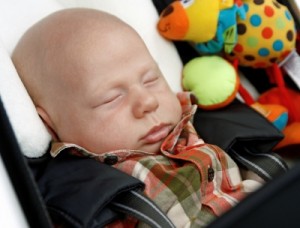 So you worked hard to establish a sleep routine for your baby and figure out the perfect strategy for getting him or her to sleep through the night—and it finally works! For a while, that is. Many parents find that eventually their toddler or older baby won’t sleep through the night, no matter how good they’ve been recently.

Most parents find later sleep regressions harder to deal with—after all, crying infant is much quieter than when a toddler or older baby cries, and an infant can’t run into your room in the middle of the night! But here are some things to be aware of about your toddler or older baby and their sleep patterns.

The first is that physically and mentally, your child’s needs are changing. As they grow, babies need less and less sleep. Newborns may sleep for about sixteen hours, whereas an average two-year-old sleeps about twelve hours per night. Adjusting to this changing need might disrupt their sleep patterns. In addition, as they mature, babies start to take more interest in the world around them. They may not want to miss a single thing that’s going on during the day. This is why some two-year-olds suddenly stop napping during the day, changing their sleep patterns as a result.

Another thing is that because of their mental and emotional development, toddlers become more vulnerable to fear and anxiety. Many younger babies have separation anxiety (the fear of being away from parents or guardians), and as a toddler, this might come back—so your two-year-old might get anxious when he or she wakes up in the middle of the night and you aren’t there. In addition, many children become afraid of the dark or start having nightmares at around this age.

The final point is that older babies and toddlers are going through a lot of changes that might affect their sleep. At around the age of two, many children start preschool or day care as parents go back to work, or their parents have another child. This can sometimes cause anxiety as well as a change in the whole family’s schedule. Moving from a crib to a toddler bed can also feel new and different and make it harder for a child to get to sleep or stay asleep. And, because children start to become more aware of their bodies at this age, they might start to notice dirty diapers more. Identifying the reasons can help you help your child adjust to the changes in his or her life and help both of you to establish a new routine for sleeping.